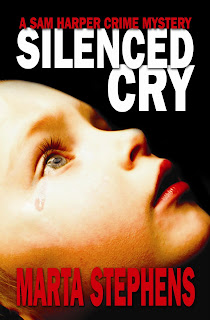 If you like mystery novels with rich plots that dig into the past, then you’ll enjoy Silenced Cry by Marta Stephens.
During a routine pick-up for questioning, Detective Sam Harper loses his partner and friend, Gillies. Harper is confused and distraught by the event, which happens under suspicious circumstances. Soon afterwards he’s called to solve a murder case like none he’s been involved before: the homicide of an infant. In a rundown building that’s about to be demolished, trapped behind a wall, they find the skeletal remains of an newborn baby. To make matters worse, the murder seems to have taken place not recently but over a decade ago, making the investigation a lot harder.
As Detective Harper begins to investigate, a line of suspects slowly emerges. The detective must moved back in time in order to uncover the terrible events which let to the infant’s demise. Soon he’s pulled into a vortex of drugs, corruption, rape and murder as other members of the police force become suspects. At the same time, someone wants the case close and the building demolished as soon as possible, someone who doesn’t want Harper opening the door to the past.
Who murdered the infant? Is the murder only a small part of a much larger set of crimes which have been kept secret all these years? Is Harper ready to face the truth and come to terms with the results of his own investigation?
Silenced Cry is deftly crafted and an impressive first novel. The pace moves steadily without being too quick nor too slow, allowing the reader to savor each stage of the investigation. The dialogue is sharp and natural and the prose focuses on the action without letting unnecessary details and description get in the way. The police procedurals read realistically, giving the impression that the author either knows well about the subject or did a fair amount of research. For me, this was not a thriller that read at a fast pace, but a ‘gourmet’ mystery that I enjoyed at every stage of the story. Sam Harper is a likable character, but I would say that this is a plot-driven novel more than a character-driven one. Our detective protagonist is sympathetic, but there were times when, for me, he got lost in the midst of the plot. I feel he would have stood out more given stronger, more sharply defined characteristics or quirks. This is an observation more than a criticism, as it didn’t lessen by desire to keep on reading. The secondary characters are quite realistic as well, especially some of the suspects–though I don’t dare say more for fear of giving away spoilers.
Marta Stephens is a mystery author to watch out for. I will be soon reviewing the second book in the series, The Devil Can Wait, and I have to say I’m very much looking forward to it. If you enjoy an intelligently crafted detective story, I recommend you give this one a try.
Posted by Marta Stephens at 6:14 AM